Distributed throughout the world including Europe, Asia, and Africa.

The megalithic culture including dolmen was distributed throughout the world including North Europe, West Europe, the Mediterranean, India, Southeast Asia, Northeast Asia and the Eurasian Continent. The megalithic culture of Europe was densely distributed along the Atlantic. Dolmens in North Europe were found in the south of Sweden, the north of Netherlands and Germany. Dolmens and megalithic culture of West Europe were found in France, Portugal, Spain, England and Ireland.
Megalithic culture of the Mediterranean exist in Corsica island, Sardinia, Provence in southern France, the southeast peninsula of Italy, Algeria, Syria, etc. Dolmens in the Black Sea were intensively distributed in Kavkaz, Russia. They were also found in India, Indonesia, Vietnam, Taiwan, China, Japan, and Korea .
Dolmens of Northeast Asia were distributed in Korea, the northwest areas of Kyushu in Japan, and Zhejiang and Liaoning provinces of China. 50 dolmens were in Zhejiang province and 700 in Liaoning province. About 600 dolmens of Japan were concentrated in Nagasaki, Saga and Fukuoka. Japanese dolmens were smaller in size than Korean dolmens as 2~3 m or 1m. There were no table-type dolmens and many small go-table type dolmens in Japan. 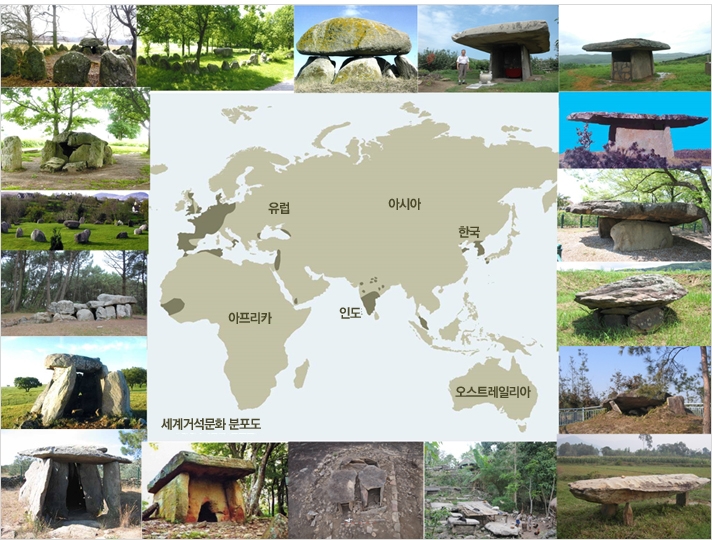